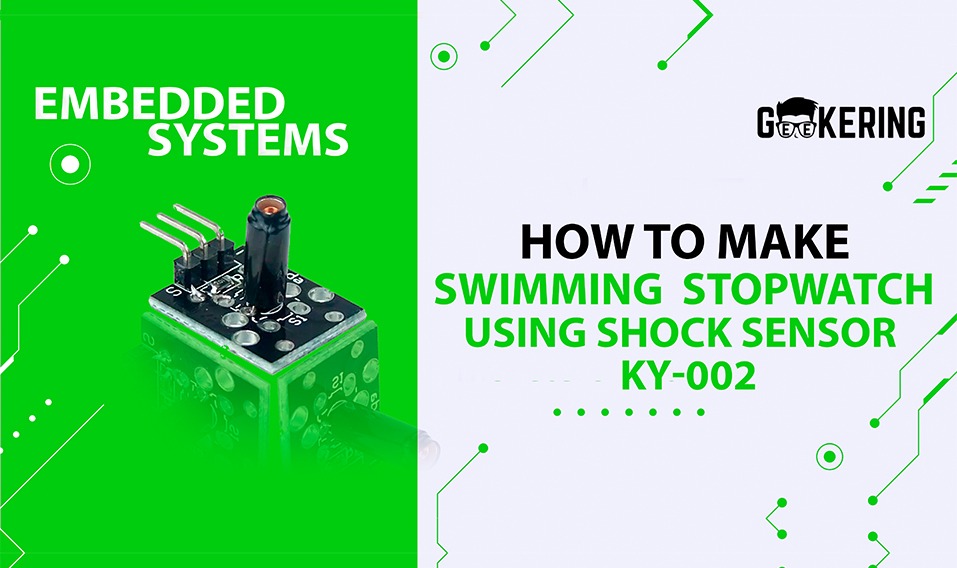 In this tutorial, I am going to show the working principle of a KY-002 shock sensor module and how to set up and use it using Arduino Mega 2560. As an example, I will use it to develop an automatic swimming practice stopwatch, but it can be used similarly in a variety of applications.

Note: Since only 10 digital pins are required for you to follow this tutorial, an Arduino Uno board or any similar board can be used instead. Just be sure to change the pin numbers in the code if necessary.

One day, I was looking into my sensor kit, trying to have an epiphany for my next tutorial, and I found a KY-002 shock sensor module. I thought I could do something interesting or fun with it, but all I could think about was an alarm in case someone is trying to break in or a toy that plays a song if a child shakes it. Not that these are not good ideas, but I was not quite convinced about them. And then, it hit me! I remembered my wonderful times as a swimmer and how difficult it was sometimes for my coach to keep track of the split times for the whole team. So, I have developed an automatic swimming practice stopwatch, which basically shows the split and split time for a few seconds whenever a swimmer touches a swimming touchpad like the one shown in Figure 1.

The logical sequence of this system is as follows:

The shock sensor module (Figure 2) is a very simple piece of hardware that functions as a switch whenever a vibration occurs. According to this module’s datasheet, it has 3 pins: 2 input pins to connect to 5V and ground and one output pin which is the signal pin in case it detects vibration.

The working principle of this sensor is very simple. From Figure 3, we can see that it is composed of a thin metal spring that is around a conductor leg. These two parts are protected by an outer case. When the sensor is shaken, the metal spring touches the conductor leg, allowing the flow of current between them. To avoid short-circuits, a resistor is added to this circuit (usually a 10kΩ resistor).

One very important aspect of this sensor has to do with the connection of the internal resistor. It can either be connected between pins 1 and 2 or between pins 2 and 3. In my case, the second connection mode applies, thus the internal circuit schematic of the sensor is as shown in Figure 4 [1]. For this reason, and since I want it to work as a pull-down resistor, the correct way to connect the sensor is:

Then, we can connect the START and RESET buttons to ground and to Arduino digital pins 1 and 2, respectively.

The LCD display follows. For detailed info regarding this hardware, be sure to check this tutorial. Connect the LCD pins as follows:

Finally, connect the positive terminal of the buzzer to Arduino digital pin 11 and the negative terminal to ground (check this tutorial for more info on active and passive buzzers). In the end, your circuit should be set as shown in Figure 5.

Unfortunately, I don’t have the necessary equipment to implement a complete and fully operational automatic stopwatch for all the lanes in a swimming pool (we do the work with what we have, right?). However, I wouldn’t be surprised if the working principle described in this tutorial is in fact very similar to the one used in a real timing system applied to swimming.

At last, we can start developing our code! Regarding the previously mentioned logical sequence of the system, the code presented below follows the same steps. After setting up the LCD and the system’s inputs and outputs, the code waits for the user to start the timing process by pressing the start button Meanwhile, the LCD displays a message indicating that the system is ready to start.

Then, the countDown() function was developed to activate the buzzer only after the START button has been pushed. This is performed with 3 beep sounds, simulating a count down effect of 3 seconds. Simultaneously, a message indicating the remaining seconds for the chronometer to start is displayed.

Afterwards, the chronometer() function was developed. This function is responsible for showing the running time and the slip number and time whenever an impact is detected by the shock sensor. Regarding the split number and time, a timer mechanism is used for these to be displayed for a few seconds. While these values are being displayed, the system will not detect a new impact. This was done on purpose, in order to limit the detection of a new impact for a certain amount of time, which is sufficient for the athlete to make the turn (only the first impact is considered) and does not exceed the time it takes the athlete to do the following split.

In case the user presses the RESET button, all the system is reset and it is then ready to start the entire process again.

That’s it! If you enjoyed this tutorial, you can visit our YouTube channel and watch this and many other tutorials. Thanks for following us and be sure to rate, comment and share our content.